There’s an ache that settles in a heart that has lost the love of its life or one that was so dear, that no words can properly describe!  I had hoped to never know that level of pain.  I desired to only watch from a distance while enjoying being wrapped in the loving arms of my sweet man who took me on as his “project” 25 years ago 😉  Oh, how I do so wish that he was still here and that my children and I had never had to lose the one we loved and the life we shared with him!  But…we have and I write to give hope.

11 days after Clint traded this “rental” (earth) for his real Home, I posted this meme on facebook:

Genesis 2:22-24 says, “Then the rib which the Lord God had taken from man He made into a woman, and He brought her to the man.  And Adam said: ‘This is now bone of my bones and flesh of my flesh; she shall be called Woman, because she was taken out of Man.’  Therefore a man shall leave his father and mother and be joined to his wife, and they shall become ONE flesh.”

Proverbs 30:18-19 says, “There are three things which are too wonderful for me, yes four which I do not understand:  The way of an eagle in the air, the way of a serpent on a rock, the way of a ship in the midst of the sea, and the way of a man with a young woman.” — The fourth thing this writer of Proverbs describes is more than “too wonderful”, it’s something he has a hard time even understanding!

Ephesians 5:22-33 give instructions for marriage, but here are verses 28, 29, 31, & 32, “So husbands ought to love their own wives as their OWN bodies; he who loves his wife, loves himself.  For no one ever hated his own flesh, but nourishes it and cherishes it, just as the Lord does the church.  For this reason a man shall leave his father and mother and be joined to his wife, and the two shall become ONE flesh.  THIS IS A GREAT MYSTERY, but I speak concerning Christ and the church.”

Matthew 19:5-6 says, “…’for this reason a man shall leave his father and mother and be joined to his wife, and the two shall become one flesh’…so then, they are NO LONGER TWO BUT ONE FLESH.”

Why do I list all these verses?  Well, because marriage is the only place in the Bible that describes two lives becoming one.  Clint used to always say that God gave us marriage and parenting to help us understand the relationship with Him better.  Paul called our union with Christ a “great mystery” in Ephesians 5 and he linked it with marriage.  Until you’ve been married, you can’t understand the oneness that happens within that earthly union.  Those that are saved but not married understand union with Christ, but marriage is a helpful symbol given here on earth to help it make even more sense .

Now, 6 months later, I am writing to tell you, that when Clint died, I felt dead too. 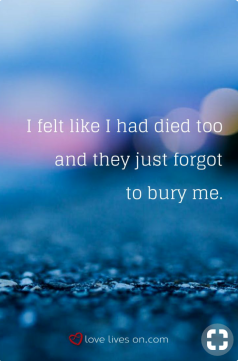 In fact, the day the doctors were paddling Clint’s chest to keep him here, I felt God paddling my chest too.  I could barely breathe or think.  It was just me and Jesus.  When Clint was allowed to go on and I was told to stay, I didn’t want to.  Until mid February, I begged every day…numerous times each day, for Jesus to take me Home too or come back to get all of His children that are waiting for the rapture!  I cried out to Him that I didn’t care how many billions of people before me lost a loved one…my loss was the worst!!!  In a moment of desperation, I cried out for Clint to tell Him that He’d made a HUGE mistake!!!  I was trying my best to accept what God had chosen but was hoping/begging for Him to change His mind!  It wasn’t until that mid February point, that I came to a place of “acceptance” and told God that He could “put the paddles away”… “I would choose to breathe again”.  I had to choose to accept life!  It’s been a process.  One my Savior has been so patient with me as I learn to walk through it.  And, He has sent me so many wonderful family and friends to sit with me in this place.

But, when two become one, and one of you dies, there is a ripping away!  I literally felt dead.  My whole world had gone black.  All the dreams WE had yet to accomplish…gone.  The grandbabies WE were going to hold…only me now.  The trips WE were going to take…alone.  The daughter’s he was going to walk down the aisle when they said “yes” to their husbands and embarked on that “great mystery” of their own…never.  WE were one; WE loved each other; WE were committed to each other; WE dreamed together; WE experienced life TOGETHER.  And, the reality this would all go on without him…unimaginable! 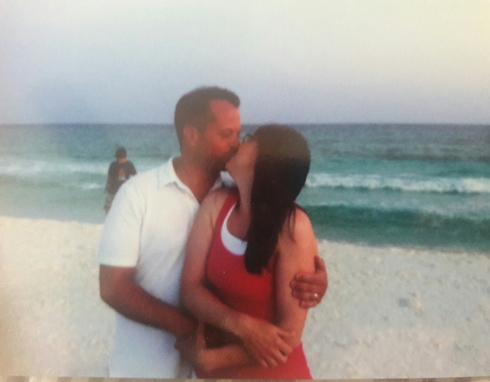 I write this to let all those who have lost a spouse know that you are normal for feeling dead or like you are missing even your very self.  When you are married, your life is so wrapped up in the person you share your whole life with, that you can’t even properly realize how much of your life they affected, until they are gone.  The impact is earth shattering and the ripples go far out and touch everything.

I’m so thankful that Jesus understands this processing of being torn in two.  He is so patient!  When He hung on the cross, He experienced the Father turning His face away.  Jesus knows what loss feels like in a way we NEVER will.  He faced the ultimate, albeit temporary, loss of fellowship with His Father…the God of the Universe, when He had never been separated before…because…They were ONE!

Be gentle with yourself!  You will never be the same, but you will find yourself.  And, as my pastor so well put it, “You will never get over this, but you can make peace with it”.

Here’s another quote by C.S. Lewis, “”Getting over it so soon? But the words are ambiguous. To say the patient is getting over it after an operation for appendicitis is one thing; after he’s had his leg off it is quite another. After that operation either the wounded stump heals or the man dies. If it heals, the fierce, continuous pain will stop. Presently he’ll get back his strength and be able to stump about on his wooden leg. He has ‘got over it.’ But he will probably have recurrent pains in the stump all his life, and perhaps pretty bad ones; and he will always be a one-legged man. There will be hardly any moment when he forgets it. Bathing, dressing, sitting down and getting up again, even lying in bed, will all be different. His whole way of life will be changed. All sorts of pleasures and activities that he once took for granted will have to be simply written off. Duties too. At present I am learning to get about on crutches. Perhaps I shall presently be given a wooden leg. But I shall never be a biped again.