When the unthinkable happens…

we find ourselves not just struggling to have faith and believe that things can or will turn around, but whether or not we even want to stay checked in to this life emotionally or physically to watch it all unfold.

After I lost my husband, in many ways I checked out. I was still breathing, still outwardly surviving, but I was just biding my time until it was my turn to die. In the very beginning, I had no desire to brush my teeth, take a shower, I won’t even start on my lack of shaving (🤣😜), wear nice clothes, eat chocolate (you know it’s bad when a girl rejects her chocolate!), go shopping…you get the point.

You know the feeling when you’ve laid in bed so long that it starts to physically hurt? Well, I “sat” in my grief so long and hard, that it physically and emotionally “hurt”. It caused me to want to live again. I slowly began to miss life. I distinctly remember laying on my floor, crying out to God that I had never wanted to be in this place. That my plan was to be with Clint the rest of my life. That even if he brought me another man, it wouldn’t matter because I had only wanted Clint for always. But I knew he wasn’t coming back. I felt such a calm come over me. I didn’t hear God audibly but His presence and words to me were unmistakable.

I literally felt like He was telling me I had grieved well. I knew Clint wasn’t speaking to me from Heaven, but I sensed that God was showing me that I had “their” blessing to live life again, find joy, and not feel guilty to come back to life! I got up off the floor that day, wiped the tears from my eyes and began to move forward. I allowed myself to dream…to invest in myself first, so I could be the mom my kiddos needed moving forward, and inhale my first real life-giving breath.

It wasn’t easy. I have cried oceans of tears since that day. But, my life slowly began to change. 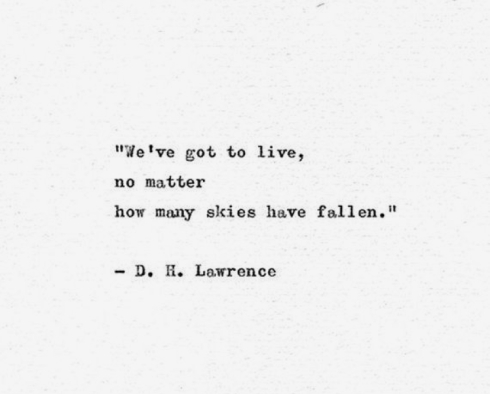 What did I begin to do?

Well, for starters, I began to get out and walk Every. Single. Day! It did something inside of me! I’ve written on this before but can’t recommend it enough!

Up to that time, I had listened to music that made me cry. It reflected how I felt on the inside. Much of that repertoire consisted of Christian music. It spoke to my heart, all the while reminding me of God’s great, unfailing love for me. When my flesh was so tempted to doubt His goodness to my family or His wisdom in allowing this to happen, this music kept me focused. However, when my attitude shifted to one of fighting to live again, so did my music choices. I began to incorporate music that motivated me, pumped me up, made me want to come back better than ever! Among the songs that helped me immensely, was the song “Stronger” by Imagine Dragons. There’s a line that says, “and you didn’t think that I’d come back alive…stronger!” This song helped to bring me back from the walking dead! Another song that helped me immensely was the song “I Lived” by One Republic — “Hope when you take that jump, you don’t fear the fall…hope when everybody runs, you choose to stay…hope when you fall in love and it hurts so bad, the only way you can know, you give it all you have. And I hope that you don’t suffer, but take the pain. Hope when the moment comes, you’ll say, I~ I did it all~; I~ I did it all~… I owned EVERY second that this world can give! I saw so many places and things that I did! Yeah, with every broken bone, I swear I lived!! Hope that you spend your days, but they all add up. And when that sun goes down, that you raise your cup. I wish that I could witness all your joy and pain. But until my moment comes, I’ll say…I~ I did it all~! I owned every second that this world can give…I swear I lived!”

I began to show up for my life! I still listened to sad music, but I only allowed it for certain times.

It didn’t get easy! It was excruciatingly hard being an only parent. I often felt like I wasn’t enough for my children. That it would be only a matter of time before they knew my smile was nearly forced and they were “on to me”. I struggled in social circles feeling misplaced, like half of a person, and desperately wanting to isolate. But God had put a fight in me and I was willing to allow Him to lead me all the way! I received His encouragement that I had grieved well and His admonition to find life again.

In one years time, I had taken my children on trips alone, dealt with numerous health issues in my children…one of whom was becoming more hard of hearing and also in his good ear, nonetheless, for reasons unknown to anyone, resulting in a hearing aid. I remodeled the home Clint and I purchased together to fix up and was continuously bombarded with car and home mechanicals breaking down.  I also began to reach out to other hurting people through a blog.

During that intense season of growth, I began to allow myself to dream of the “what if” God had someone out there for me. I went from not wanting anyone but Clint, to telling God that even if His plan was to give me someone new, that wouldn’t help, because I only wanted Clint. It was then that I remembered Clint’s grandmother telling me way back in 1997, right before the birth of our second child, to not worry that I wouldn’t love my new baby as much as my first, because the love comes with the child. This gave me hope that maybe I could love another. By September 2018, I was in a relationship with my current husband! 4 months later, I said “I do”. It was as if God just dropped him out of the sky, into my life AND exactly what I had prayed for! On top of all that, He did the unimaginable…He created room in my heart for another Love!

One month later, I faced a massive fear head on! I’ve always had an extreme fear of public speaking. Growing up I would do the book report but take the zero for the front of class presentation. Before Clint even passed, I had told him I was wondering if I was supposed to tell my story to groups of women one day. I asked him if it sounded silly. He said, “no way, babe, in fact, I think you’re going to do it!” I reminded him that I was terrified to public speak but he was undeterred in his sureness of it. That night in February of 2019, as I stepped into an auditorium to speak to hundreds of women, the two colors they chose were Clint’s and my colors! I knew I was meant to be there and believed God had used those colors to remind me I wasn’t alone and this was indeed where He wanted me! With shaky legs and butterflies in my stomach, I got up and spoke. As a result, God allowed me to be touched by so many other amazing women who have endured intense hurt and loss! Women that I gain strength from as I watch them fight hard every day to come back from the dead as well!

You never know the difference a day, a month, a year can make! I don’t know what place you’re in right now. Maybe you’re at the end of your rope. Maybe you just can’t see how God could ever cause you to feel joy again. Maybe you aren’t even open to feeling it right now. I’m here to say, hang in there! Tell Him exactly where you’re at! There are no two stories the same. My story won’t be your story. But I know my God! He is the Author of beautiful stories! Have faith!

But…when He’s faithful to light a fire in you…whenever that time is…promise YOURSELF that you’ll take Him up on it! I’m so thankful I loved Clint hard and with everything I had! I’m just as thankful that I loved myself enough at some point to get up and live again, love my children, others, and a new man…SO that I can continue to sing, “I~ I did it all~! I owned every second that this world can give…I SWEAR I lived!”